skip to main | skip to sidebar

It's kind of gratuitous, and old news, but Neil's throwdown with Colbert makes me happy. So.

Well, longish, anyway, for the blogosphere.

I've been mourning the passing of Ms. Lucky, and trying to pay more attention to the remaining two cats, and just generally muddling along. I've got about five or six potential blog posts queued up in the back of my brain, but they aren't happening just now. So. Bear with me. They involve dirigibles, desert islands, AIG (how could they not?) and other random shit that's floating around in my brain. And they will come, eventually.

Not tonight, though. This is more just a placeholder, "No, really, I'm still here" post, than it is anything else. But I am still here. I'm just sayin'. Hopefully we'll tack on back to all that this weekend (I'm also working for a living, which is time-consuming and which often sucks). Who knows, there may even be writing afoot...not that I'm being terribly good with that these days, but the Emilyon is doing her best to support and goad me in that, which is enormously appreciated.

Anyway. More on this as it develops. Which makes a nice throwaway line, if nothing else. Cheers.
Posted by Dano at 12:10 AM 1 comment:

Sadly, my littlest little one didn't have it in her to overcome her ailment. She died in my arms at the vet's at about 5:55 this evening. She wasn't getting any better, and when I got there she seemed like she was pretty much done. I am very sad, but putting her to sleep was the right thing, I think. She's in a better place now, I hope...one where her legs work again, and there are fields of catnip and plentiful small rodents that are easy to catch and good to eat, and about a zillion secondhand couches lying around so that she can pee wherever she pleases and not get yelled at.

Rest in peace, little one. You will be missed. 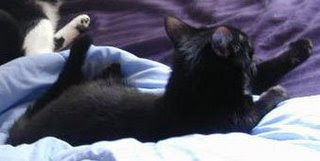 Light a Candle for Lucky, the Little Black Cat 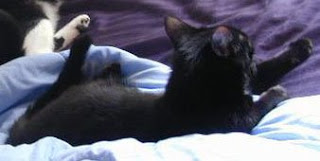 So one of my little ones is ailing. I got a phone call yesterday afternoon from my roommate, who had come home to find Lucky dragging herself around the apartment with her front paws, because apparently her back legs had ceased to function. I left work and took her to the vet, who diagnosed her with a blood clot that was obstructing the flow of blood to her lower extremities. It turns out that this is not terribly uncommon with cats of her age and lineage--it is a consequence of hypertrophic cardiomyopathy, which is a sort of congenital circulatory disorder. It's the sort of thing they can try and treat, but there's not a great deal that can be done with any certainty.

So she's been at the pet hospital since yesterday, and they're pumping her full of fluids and pain meds and stuff that they hope will dissolve the blood clot, but while she's shown some slight signs of improvement, she still has not regained the use of her back legs. The vet told me this afternoon that if this state of affairs doesn't improve by tomorrow, I should seriously consider putting Lucky to sleep. And sadly, I am. All I can really do right now is hope that things improve for the better between now and tomorrow.

So please, one and all, light a candle and think good thoughts at Lucky, the little black cat. She's a sweetheart, and she's only three and a half years old, and I'm not really ready to say goodbye to her yet. All good wishes will be greatly, greatly appreciated. Thanks.
Posted by Dano at 3:42 PM 8 comments:

So the apparently lengthy research/learning curve process proceeds apace for the "Percival Lowell Goes to Mars" story. It's an interesting process, and an instructive one...I've never tried to conceive of a viable alternate history/alternate science story, and what all seems like it needs to go into the preparatory research process is interesting, and daunting. First I had to get a sense of the physics and energy requirements of achieving escape velocity from Earth's atmosphere. Then I needed to look into the existing (or almost existing) technology of the time--in this case, the time period between 1900 and 1915 or so. Then I needed to think about other things, like how such a craft might be powered, or propel itself, if it did indeed escape the gravity well and get into interplanetary space. And I needed to consider how things did actually go in history, and look for moments or instances where something might have gone differently, and then begin to postulate the consequences of such a divergence, to see if the posited diversion might be useful to the story I want to tell and and to support the alternate future I want to explore.

One odd consequence of my somewhat random and haphazard research into various things is that I increasingly believe that it was at least technologically possible that we could have launched a viable spacecraft in 1915. The theory and the rudimentary implementation of the necessary technologies was there...nobody was taking the next necessary steps in that research yet, and wouldn't ultimately do so for a number of years, but a whole lot of the shit that might make such an endeavor work was already on the drawing board, at least implicitly.

So then the question becomes, what would have to have happened differently to persuade people--scientists, financiers, etc.--to make it possible for something else to have happened. I've been looking at the beginnings of rocketry theory, Tesla's crazy experiments with electicity and magnetism, Modernist poetry (Amy Lowell, the Imagist poet, was the sister of Percival Lowell, as it turns out), as well as early attempts at viable solar power and Robert Goddard's positing of the viability of ion drives for space travel in the interplanetary vaccuum.

Thing is, the more I look at all these disparate bits, the more I see possibilities regarding how it could have happened differently. Roundabout the time Percival Lowell decided to build his observatory in Flagstaff, Nikolai Tesla moved his center of operations to Colorado Springs--in the American southwest of the 1900's, they were practically neighbors. Tesla was also inspired by Lowell's writings about the canals of Mars to work toward a way of communicating via projected energy with Mars. Likewise, while the Lowell Observatory was under construction in Flagstaff, there was a solar energy concern that sold its first photovoltaic electricity-generating apparatus to someone in Mesa, AZ (which was subsequently destroyed in a windstorm). Most all experimentation into solar power at the time was focused around the discovery that selenium gives off electrons, thus producing electrical energy, when exposed to sunlight, and it turns out that selenium is most easily obtained as a byproduct of copper refining--and Arizona was, and is, one of the biggest producers of copper in the United States. Also, Lowell was of the Boston aristocracy, and one of the early pioneers of rocketry theory was a guy named Goddard, who was very much embedded in the Boston academic/intellectual scene. I'm pretty sure that Lowell and Tesla never met, and that Lowell and Goddard never did, and that Tesla and Goddard didn't, but maybe they did, and even if they didn't they could have, had things gone a bit differently.

That seems to me, at present, to be how the alternate history thing has to work. It's like, maybe it didn't happen, but it could have, and if it did how would things be different? And to build the alternate present and future one has to ascertain what could possibly have happened differently, and then think through what the consequences for future time would be had those things actually transpired in a different way. It's a fascinating historical scavenger hunt to try to build a story from those sorts of considerations, and there is a huge learning curve, but it's sort of awesome and a whole lotta fun to try it. I'm also enjoying the way it seems to boil down to issues of plausibility--the more things one finds in the historical record that suggest that, well, it could have happened, the stronger the spine of the mooted story winds up being. So. Good times.

And somewhere in the SF Metro area, Emily J is laughing at me, no doubt, because once again something that seemed at the outset like a more-or-less innocent and manageable story idea has swelled into something that probably could, and maybe should, be a novel.

Tra la. We shall see. In any event, it's good times. And my Percival Lowell books about Mars should probably be arriving in my mailbox sometime this week. Yay.
Posted by Dano at 9:58 PM 3 comments:

I dunno. I suppose that's been my mantra, or my catchphrase, or what have you, for a long time now. Something I told myself, and something I managed to do, even when I didn't want to and even when I didn't believe in it. The notion is, in essence, that if you're in a bad place, and you don't know how to get out of it, just keep moving, keep walking, and eventually you walk your way to a better place. Maybe.

Well, it turns out that the bullshit that I've been telling myself to keep myself getting up out of bed every morning for quite some time turns out not to be bullshit after all. That's kinda cool.

I'm in a Ph.D program now, and it's paid for if I want it (assuming I don't fuck it up in the process of doing it, but I'm reasonably confident that I won't), and so my future is sort of secure for the next few years, at least. That's the best, it seems to me, that one can hope for, and I actually got there. There was a plan, and directed intent, but I am honestly kind of shocked that, even given that, it seems to have worked. But it did, goddamn. Not by some stroke of master strategy or cunning badassness, but by doing the business, showing up, tossing what I have out there into the world to the extent that I've been able on a given day. A repeated and repetitive act of faith, really, in a sense. I've kept marching. And here I am.

Pretty awesome. The next chapter of this particular novel is almost nigh. Yay.
Posted by Dano at 1:04 AM 5 comments:

Well, the happy news the other week was that I got accepted into a Ph.D program at the University of Southern Mississippi. The happy news tonight is that I came home from work to find that USM had decided to offer me a TA position which will pay for much of my stay there, if that's where I wind up going. So. Yay. BIG yay. Yay. And I get to teach again, beginning in the fall. So once more, yay. Yay yay yay. That's all.
Posted by Dano at 12:46 AM 1 comment: